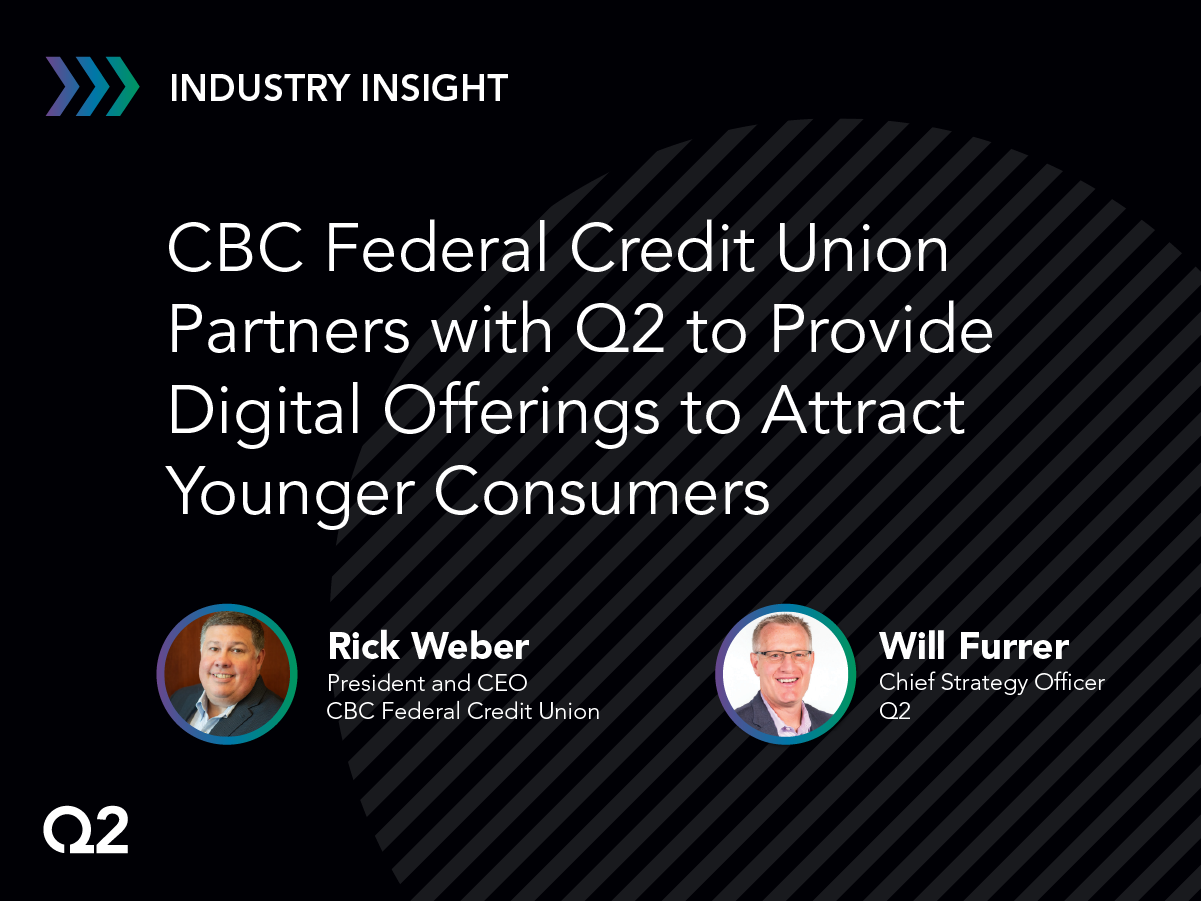 Q2 Chief Strategy Officer Will Furrer sat down with President and CEO Rick Weber of CBC Federal Credit Union (CBC), who shared his thoughts on how a community credit union can make itself relevant to younger consumers. CBC was founded nearly 70 years ago to service civil employees on a Naval base in Port Hueneme, California, but in 1999 it expanded its membership field to anyone living or working in Ventura County.

What follows is a transcript of Furrer's recent conversation with Weber, edited for flow and conciseness.

Will Furrer (WF): Rick, what's the biggest challenge CBC faces that it believes it can solve by offering full-service digital banking capabilities?

Rick Weber (RW): Right now, we have a lot of loyal members who have been here for 40 or 50 years. They love to brag how long they've been here and had their account. As these members get older, we get the second and the third generation. We get the kids and the grandkids. But we've got to have services to provide for them. And that's the challenge for us because the young kids will say thank you for taking care of grandpa's money, but if you don't have the innovative features they’re interested in, they'll take their business elsewhere.

So, we're losing the grandkids. We're losing those 20-year-olds because they just don't see the value in CBC unless we have the digital platform. And we can see that this Credit Union will be extinct over time if it doesn't figure out how to serve the younger group.

WF: When you think about attracting younger members and providing generational banking, how important is it to have a partner that can help you accelerate innovation?

RW: As a community-based credit union, we're expected to service everything in the community, from car loans to credit cards, including providing technologies like mobile banking and Zelle. But there are so many challenges with that, and we only have 114 employees across 25 departments. We don't have the bandwidth for that creativity. We're lucky to just keep everything open all the time and put out the fires.

So, we're always looking for partnerships with companies that can provide that creativity. We're looking for partners that can be that department. That's more than a vendor relationship. I only have two people in the digital space right now. But now I can reach out to Q2, and you'll help us develop that stuff so that we can give those kids and grandkids the experiences with technology that they're expecting, and keep them as members.

WF: You and your team have several things that you're getting ready to roll out. Would you mind sharing what allowing members to send money internationally is going to mean to your community, as well as how you've identified a partner through the Q2 accelerator program to help you plug in to the CBC app?

RW: A lot of people grow up in Ventura County picking strawberries and other vegetation, and a lot of them send money back home all the time. And my chairman, who grew up here, says that if you're really going to serve the community, you've got to find a way to allow them to wire money.

It was kind of old-fashioned the way we had it before. You'd have to set up a $61 deal to do an international wire, and it took so long to do, and that just doesn't work for somebody trying to send a few dollars to their family in Mexico or the Philippines.

And so, we're looking for something, and my digital team, which had been getting familiar with Q2's Marketplace, brought up TransferWise (which has since changed its name to Wise). So, I started investigating, and it's fully integrated and totally digital. It's going to be easy, and it's going to be low cost, and I don't have the liability and the buildout for it.

That's going to be a game-changer for us because otherwise, we’re risking our customers going down the street to Western Union. Now they can stay within their credit union, bring their money in and transfer from the convenience of a mobile device.

WF: You recently visited Q2. Can you share some of the impressions you and your team took away from working with our teams in Austin?

RW: We do a lot of Zoom meetings with your team, but actually being there, you get to really know everybody. And it's really important that Q2 understands our story, so you can really fit like a glove with what we're trying to do.

For instance, the fintech companies are putting together things that customers can do alone in five minutes. I simply don’t have the in-house staff to compete with that. But with Q2's capabilities, we can meet some of those online challenges and make it at the mobile level.

I love the creativity I saw down there. It's so different than a credit union, where we're just trying to follow procedure. From what we saw at Q2, it's all about collaborative creativity, and we love to see that.